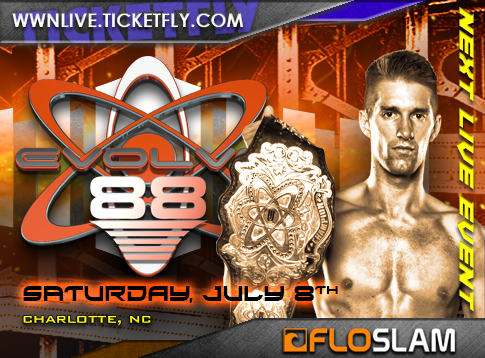 News
EVOLVE has changed venues for the long awaited return to Charlotte, NC on July 8th. We now have a newly renovated, much better venue in the heart of Charlotte. EVOLVE 88 will now be at Uptown Live on 935 S Summit Ave. in Charlotte, NC with a zip code of 28208.
The main event for EVOLVE 88 in Charlotte just got even bigger. After the happenings of EVOLVE 87, the main event on July 8th will now be EVOLVE Champion Zack Sabre Jr. defending the EVOLVE Championship vs. Timothy Thatcher in a No Holds Barred Match! Thatcher has had some memorable and violent No Holds Barred Matches in EVOLVE vs. Biff Busick, Drew Gulak and Matt Riddle. He thrives in this environment. Can he win the championship back? This will also be the final meeting between Zack Sabre Jr. and Timothy Thatcher in EVOLVE. This classic rivalry will end in Charlotte.
Keith Lee vs. Ethan Page in a Grudge Match has been added to EVOLVE 88. Lee scored a victory over Page at EVOLVE 86, but Page attacked Lee while he was down at EVOLVE 87. Now this epic battle of big men comes to Charlotte!
Jason Kincaid vs. the returning Caleb Konley is set for Charlotte. Kincaid has been on a losing streak, and his job is on the line. Konley, who has had great success in DGUSA, EVOLVE and currently in FIP, is looking for a win to take Kincaid’s spot.