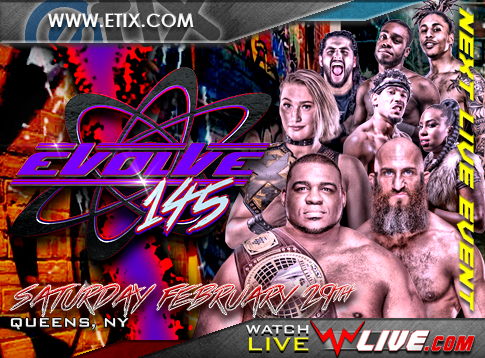 Latest News
There were several match announcements by the @WWNEVOLVE Twitter last night. Get tickets and info at Etix.com. Here’s what was announced:
EVOLVE 145 – Queens, NY – February 29th
Battle Of The Skulk – Winner Gets Tag Team Title Shot at EVOLVE In Chicago On March 15th
AR Fox & Leon Ruff vs. Adrian Alanis & Liam Gray
Grudge Match
Joe Gacy vs. Colby Corino
EVOLVE 146 – Melrose, MA – March 1st
First-Time-Ever Match
JD Drake vs. Curt Stallion
Grudge Match
Joe Gacy vs. Anthony Gutierrez
Tag Title Defense In Chicago: EVOLVE Tag Team Champions, BESTies In The World, will make their next defense of the championship at EVOLVE 148 in Chicago on March 15th. The challengers will be determined on March 15th. Will Fox & Ruff get a rematch and try to win the titles back? Will Alanis & Gray score the biggest win of their careers? Can the BESTies dominate the EVOLVE team team scene?
World Wrestling Network