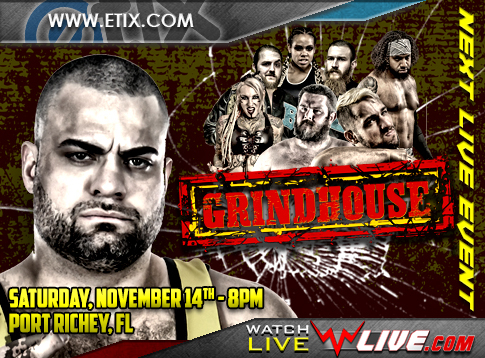 The name Eddie Kingston has been featured in the professional wrestling media quite a bit these days and his influence is not slowing down! This Saturday, Kingston’s eponymous brainchild returns as WWN presents Grindhouse on November 14th. The card features a mix of talents who stood out at Grindhouse: Ground Zero as well as athletes that have caught Eddie’s eye based on their showings in the squared circle. The voice of WWN, Lenny Leonard, returns for the call, along with the one-of-a-kind color commentary from Eddie Kingston himself.

When interviewed, Kingston provided these insights on his match-making: “Davey Vega was in the first Grindhouse match and he wasn’t pleased with the outcome. I asked him to come out of his comfort zone last time but given he’s a tag team wrestler, I really liked the idea of him being in the first Grindhouse tag team match to show what he can do in his element. Thomas Shire wanted another shot at Jeremy Wyatt, and after Shire’s showing at Ground Zero, I said sure. I hope he doesn’t regret it… Joseph Black showed me something in his initial victory but now we find out how he can handle someone the caliber of JD Drake. Show up and prove! I keep hearing about this Hunter Law kid, and Troy Hollywood impressed me with his win at Ground Zero, so it seemed like a natural fit to have two young, hungry guys face off. I had no clue that they broke in to the sport together when I made that match. When I think fight, Savannah Evans and Lindsay Snow are the first two female athletes that come to my mind. They don’t come more tough than them. And while a family situation pulled Anthony Henry off September’s event, seeing how good Fred Yehi looked last time I knew that I had to get those two in the ring to be the main event on November 14th. This is going to be my kind of night!”

A limited number of tickets are available at https://www.eventbrite.com/e/eddie-kingstons-grindhouse-tickets-128199033761!