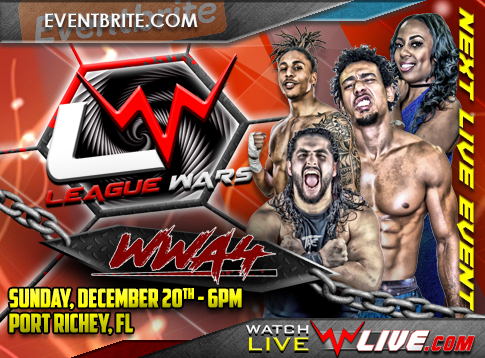 The World Wrestling Network (WWN) has a storied history of bringing Club WWN viewers the best talent and promotions across Independent Wrestling! The number of talents currently featured on national television that came through WWN is staggering, but one thing that unites the majority of them is being featured early in their careers prominently via WWN promotional outlets. Now, WWN is ready to debut it’s newest brand focused exclusively on showcasing the promotions and their talent that are seeking a larger audience!

Introducing League Wars, a season-based series of events featuring an independent wrestling promotion, or promotions, on each episode. Each season will consist of eight episodes and a finale, which will feature talent from all promotions that participated in the season in a one-night tournament to crown a League War Season Winner.

WWN is proud to announce that Season 1: Episode 1 of League Wars will feature AR Fox’s WWA4 Pro Wrestling! Long time Club WWN subscribers are no strangers to WWA4, having watched the growth of WWA4 alums, such as former NXT North American Champion Leon Ruff, current NXT Superstar and former WWN & EVOLVE Champion Austin Theory, current Full Impact Pro Wrestling World Tag Team Champions The Skulk of Adrian Alanis & Liam Gray and current American Combat Wrestling Cruiserweight Champion Bobby Flaco grow in front of their eyes in FIP, ACW, WWN Supershow, EVOLVE Wrestling and Style Battle. Now WWA4 will bring to you a mix of their new class along with some of the WWN Faithful’s favorites in a night that’s sure to excite!

When asked for comment, WWA4 Training Facility Head Trainer AR Fox declared, “AYOOOOO! We’re always on go at ‘A4 and it’s been too long since we’ve brought the fam to WWN. We’re gonna be goin’ all the way up when we take over League Wars. Ayeeeeee!”.

The WWA4 Pro Wrestling and Training Facility is located in Atlanta, GA. Head of Operations Ayla Fox offered, “If you’re interested in any aspect of professional wrestling, WWA4 will make you feel welcome, get you trained up smart and help you get on go with the party crew!”. Featuring weekly events every Thursday night at 8 PM, talent put to practice what they learn under the tutelage of AR Fox in front of a live audience gaining invaluable experience. Turn your dream into reality and apply at http://WWA4ATL.com!

Club WWN is THE subscription service for the independent wrestling fan, featuring on demand access to over 1000 hours of content from hundreds of events, live viewing of WWN Family events, loyalty points for purchases at http://www.WWNLive.com and more for only $9.99 per month! This is your destination for access to professional wrestling of all styles ranging from the top women athletes in SHINE Wrestling, battles with few rules in Full Impact Pro Wrestling, fights where actions speak louder than words in Eddie Kingston’s Grindhouse, good old Southern rasslin’ in American Combat Wrestling, battles for promotional supremacy in League Wars, Lucha Libre action for the entire family in Viva La Lucha, the best across all of WWN competing in the WWN Supershow, intergalactic battles between giant monsters in Kaiju Big Battel and much more to be announced! Club WWN is available on Android, iOS, Roku, Amazon Fire TV, Android TV, Apple TV, Apple Airplay, Google Chromecast, Facebook and the Club WWN Web App. Join Club WWN and get more info at https://wwnlive.com/my-account/club-wwn-registration/

The World Wrestling Network (WWN) is one of the top professional wrestling production houses in the United States with a legacy dating back to 2001. WWN is your gateway to the best independent professional wrestlers in the world through its promotional umbrella that includes WWN Family promotions (SHINE Wrestling, Full Impact Pro Wrestling, American Combat Wrestling, Viva La Lucha, WWN Supershow, Eddie Kingston’s Grindhouse, League Wars and more), Kaiju Big Battel and numerous independent promotions across the United States! WWN Family events appear live on Club WWN for subscribers and are also available for individual purchase at http://www.WWNLive.com and http://www.FITE.tv. Merchandise, including t-shirts, Blu-rays and DVDs from WWN Family promotions and others, are available http://www.WWNLive.com.